Dendroica nigrescens
Passeriformes
Members of this diverse group make up more than half of the bird species worldwide. Most are small. However their brains are relatively large and their learning abilities are greater than those of most other birds. Passerine birds are divided into two suborders, the suboscines and the oscines. Oscines are capable of more complex song, and are considered the true songbirds. In Washington, the tyrant flycatchers are the only suboscines; the remaining 27 families are oscines.
Parulidae
This large group of small, brightly colored songbirds is a favorite of many birdwatchers. Wood-warblers, usually called “warblers” for short by Americans, are strictly a New World family. Most of the North American members of this group are migratory, returning in the winter to the tropics where the family originated. Warblers that nest in the understory tend to have pink legs and feet, while those that inhabit the treetops usually have black legs and feet. North American males are typically brightly colored, many with patches of yellow. Most North American warblers do not molt into a drab fall/winter plumage; the challenge posed to those trying to identify warblers in the fall results from looking at mostly juvenile birds. Their songs are generally dry, unmusical, often complex whistles (“warbles”). Warblers that live high in the treetops generally have higher-pitched songs than those that live in the understory. Warblers eat insects gleaned from foliage or captured in the air. Many supplement their insect diet with some seeds and fruit, primarily in fall and winter, and some also eat nectar. Most are monogamous. The female usually builds the nest and incubates four to five eggs for up to two weeks. Both members of the pair feed the young.
Fairly common summer resident, mostly west.
Source of Bird Audio

The Black-throated Gray Warbler is a small bird with a gray back and white to off-white undersides with black streaks. It has two white wing-bars and alternating black and white stripes on its head. The male has a black throat, and the female and juvenile have gray or whitish throats. Both sexes have a small, yellow spot in front of each eye, although this marking is very difficult to see in the field.

Throughout most of their range, Black-throated Gray Warblers inhabit a variety of deciduous or mixed deciduous-coniferous woodlands, often with oak present. In Washington, which does not have a significant amount of oak, they are more generalized. They do breed in the remaining oak groves in southwestern Washington, but they also use mixed and coniferous forests, where they are often found in second-growth and edge areas.

Black-throated Gray Warblers associate with mixed feeding flocks, especially during migration. They spend much of their time in the treetops, although when they are found lower down, they are not extremely wary and can be observed closely. They use a variety of foraging styles; most commonly they glean food from foliage while they climb about on tree limbs.

Much of the breeding biology of Black-throated Gray Warblers is unknown. They are most likely monogamous, and nests are typically situated on horizontal branches from 7 to 35 feet off the ground. Nests are open cups made of weeds, grass, plant fibers, and moss, with a lining of fur and feathers. The female builds the nest and incubates 4 eggs, although the incubation period is not known. Once the young hatch, both sexes feed them. It is not known when the young fledge, or for how long the parents feed them. In some areas, as soon as the young can fly and find their own food, they leave the breeding grounds for higher elevations.

Most Black-throated Gray Warblers winter in Mexico, although some remain in southern California.

These common, summer visitors are found throughout western Washington from mid-April to mid-September, with smaller numbers remaining through September. They are also abundant in the Garry oak habitat in Klickitat County. They are relatively rare in eastern Washington, but can be found locally in a few spots in Kittitas and Yakima Counties. 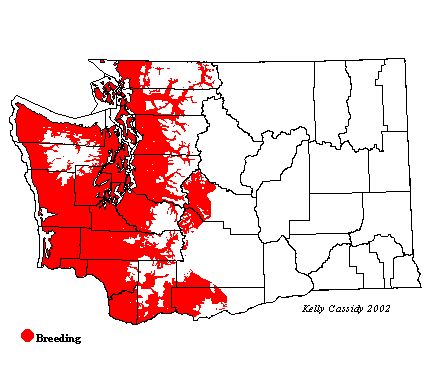